Since I last wrote to you all I’ve been feeling loads better.  After a couple of days rest I was well enough to sit up and go in my jumperoo and was back to my usual smiley self!

The doctors tried me with some milk on Tuesday but it made me really sick so my feeds were stopped.  I decorated my cot a couple of times!  On Thursday I had an xray of my tummy so they could check everything was ok…they wanted my nappy off for it so of course I had to wee all over the table!  I was also given some suppositories to try and help me and voila, I soon had a yucky nappy.   Mummy made a big fuss and told me I was a clever boy and Daddy told all his work friends, they’re so weird sometimes!
I’ve had Dioralyte since yesterday and I’m going back on big boys milk too.

The good news is my liver levels have improved a bit so Mummy and Daddy are crossing their fingers and toes that they stay that way!  The next couple of weeks will be important in deciding whether I need a transplant so I have to try my hardest to get better!

I also had a big hearing test this week, which of course I passed with flying colours.   You have to have good hearing in here to keep tabs on the nurses (hey girls!)

I’ve had a nice weekend with Mummy and Daddy and Ella.  I love weekends as it means I get to see my silly big sister!  Nanny and Grandad came to see me today too so I was on my best behaviour and was super smiley for them! I even had a little chat with Nanny!

That’s all for now.  I hope to be back with more good news next week. 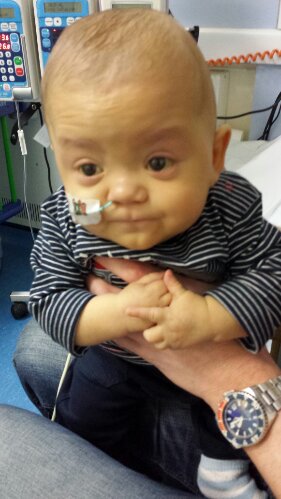 Apparently I look like a gnome which Ella thinks is hilarious 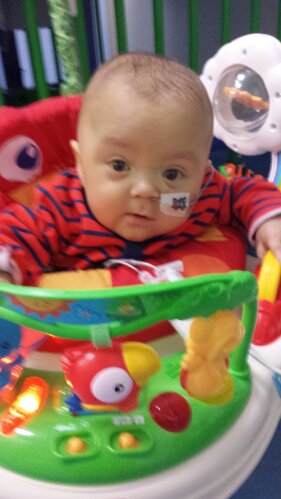 It’s been a busy couple of weeks for my Mummy and Daddy as the doctors have been talking about getting me a new liver and small bowel.  I’ve had to have lots of tests done to see how my liver is coping and if my liver has made other bits of me poorly.
The doctors decided that it would be best to rejoin my small intestine to my large intestine while my liver is stable and then in time hopefully they will be able to give me more milk which would mean I would need less PN and that would give my liver a chance to recover. My liver might still be too poorly so they think I might still have to go on the transplant list. I’m going to show them how strong I am though!

On Friday Mummy and Daddy changed my stoma bag for the last time (after I managed to leak all down Mummy!!) and put me in a special gown before taking me and my cot on an adventure to theatre.  Mummy and Daddy held my hands and stayed with me until I was asleep.  When I woke up Mummy and Daddy were waiting for me and they followed me back to the ward.

All ready for theatre

Dr Jester has said that the operation went well and I have 35cm of small bowel which is 15cm more than they thought!  I was really sleepy for the first couple of days so I needed oxygen as I was too tired to breathe by myself. My tummy is really sore but I keep forgetting and then I kick my legs and it really hurts and it makes me cry. I’ve got lots of medicine to help though. Mummy and Daddy have been giving me lots of cuddles though so that’s made me feel better and my big sister Ella came to see me yesterday too.  I was too tired to smile at her but I knew she was there! 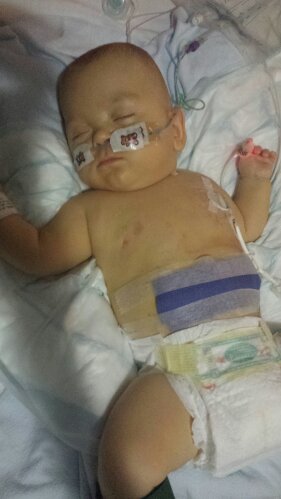 Doing big sleeps to get better

I felt lots better today and was back to smiling at Mummy and Daddy who were trying their best by making silly noises and pulling faces. I really wanted to play but I have to stay lying down so it doesn’t hurt my tummy.
The liver and gastro consultants and surgeon have all been to see me today and they’re happy with me so I just need to keep telling my liver to get better!

Anyway,  it’s time I did some more resting! 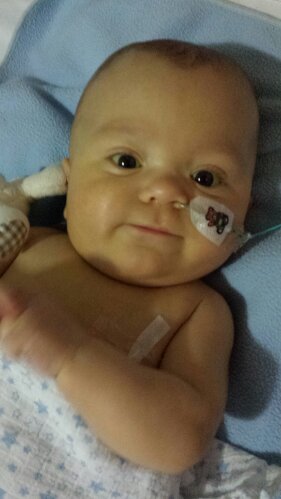 We’re very much in limbo at the moment.  On one hand, we have an amazing little boy, who’s getting bigger by the day, smiling and giggling, but hanging over us is the concern of Oliver’s liver and the reality that he may need a liver and small bowel transplant and we are currently a week into a transplant assessment, and we’ll get the outcome of that assessment at the end of this week.  The last week has been the toughest in a long time.

It’d be easy to think that you get a new liver and that’s the problem fixed.  Sadly, it’s not that straight forward.  There’s an unknown wait for a donor to become available and the family to kindly donate the organs and we’d then be faced with a very long operation and recovery. Rejection and infection are the two biggest risks of transplant as the body tries to reject anything it sees as foreign, so immunosupressants are needed to supress the immune system, which therefore makes the body more susceptible to infection.  Oliver’s entire life would be altered by a transplant, but equally he may not manage without it.

We have spent the last week having counselling by the Transplant Nurse at Birmingham Children’s which has been really useful and we have a load more appointments lined up this week with the transplant team including the anaesthetist and surgeon who would be involved.  There’s so much detail and it seems like transplant is a done deal at times, but once we have the outcome and make a decision, it’s all systems go so we need to be prepared and informed.

It’s hard to think that before Oliver was born I was a wimp when it came to anything medical.  The sight of sick would make me turn green and blood would have me hiding behind my hands.  I’ve lost count of how many times I’ve seen Oliver have his blood taken, and I held his arm tight the other day so that one of the registrars could get a cannula into his wrist!

Oliver has been back to theatre twice since our last update as well as he had another confirmed line infection.  Due to his liver, the doctors didn’t want to take any chances and his line was removed and a few days later, a new line was put in.  Oliver, as always, was a little superstar and for the first time I was able to go to theatre with him and stay with him whilst he was anaesthised.  Within 90 minutes Oliver was on his way back to the ward and smiling away, before admitting defeat and having a mammoth sleep!  The new line meant Oliver could have his cannula’s removed and after going 4 days without PN, this could also restart.

That’s about it for now.  In the meantime we’ll be crossing our fingers and toes that Oliver’s liver makes a remarkable recovery.

The good news is Oliver recovered from his bronchiolitis and line infection in time for Christmas. Oliver clung on to a trickle of oxygen but I gave him a talking to on Christmas Eve and he did as he was told and was in air and full of smiles on Christmas Day.  Santa brought him a jumperoo which he loves although his little legs don’t yet touch the floor. He was spoilt rotten and has lots of lovely new toys and clothes at home waiting for him as well as presents donated by Birmingham City FC, Starlight, Radio Lollipop and the lovely nutritional team.

Both Paul and me have started our PN training and yesterday we had our home assessment by the community nurses to discuss PN at home which was all very positive.

So while Oliver has turned a corner and seems to be doing well we were optimistic that his stoma reversal would take place shortly…however we were dealt a new blow yesterday when the liver consultant Dr Hartley said his liver is a cause for concern and he cannot be reconnected until they are sure his liver can cope.  It’s a catch 22 situation as for Oliver’s liver to recover he needs to tolerate more feeds and less PN…but that can’t happen without reconnection which poses a threat to the liver at the moment!  Frustrated doesn’t come close!  The next steps are to do an ultrasound on his liver and spleen and to do a liver transplant assessment which will take a couple of weeks.

We remain hopeful his liver is stable enough for the reconnection as we don’t even want to consider the need for a transplant right now….we just want our boy home.

Here’s hoping 2014 will be a more positive year. 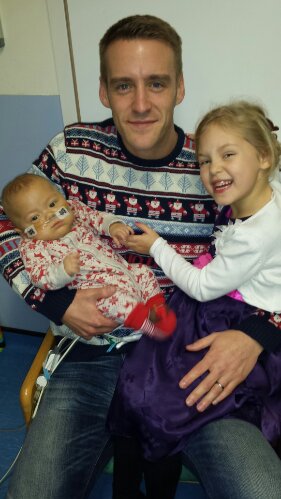 My awesome family on Christmas Day